The story is of 4 wealthy southern girls in the early 1960s in their summer before college. Well two of them are going but the other two are not. They are prim proper Luanne (Page Hannah) a senator’s daughter and blonde, sexy Melania (Bridget Fonda). They are also Pudge real name Caroline (Annabeth Gish) a formerly plump, slightly nerdy but cute girl who suffers from low self- esteem. Finally beautiful Carson (Phoebe Cates) who is having doubts about her engagement to tobacconist’s son Harley. They go to Myrtle Beach to celebrate Carson’s last summer of freedom before her marriage. They also go there because they want to have fun, meet boys and dance the shag. The dance shag is actually rather unexciting even though it is supposedly a major part of the film. However the dance competition is quite entertaining to watch. 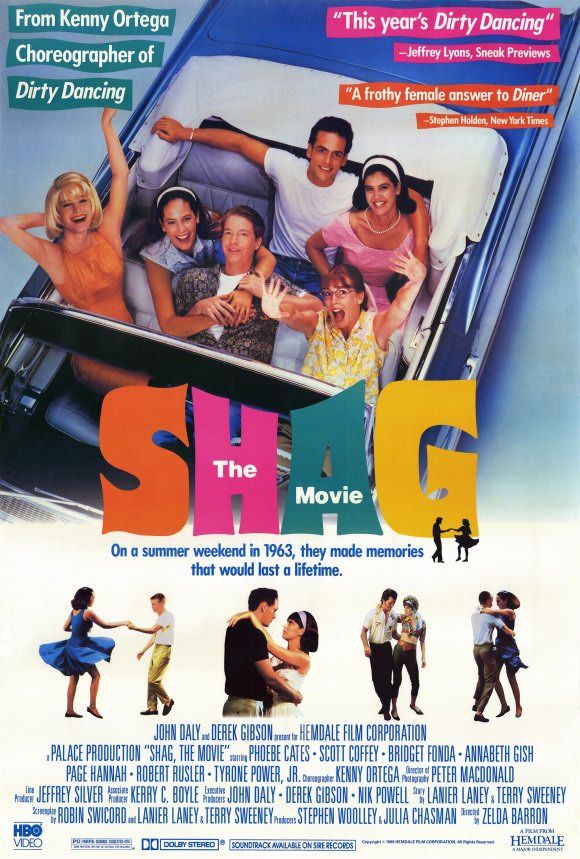 They soon meet some boys in the form of a 1 dimensional bad boy Buzz (Robert Ruzzler) and his nerdy looking friend Chip( Scott Coffey). Chip and Pudge soon form a connection and she persuades him to dance the shag with her and they decide to enter the shag contest together. There is also a mutual attraction growing between them. However it is stilled by his awkward declaration that he wants to write to her when at college in friendly and not romantic terms. This makes her reject him and she also refuses to do the shag contest with him even though they are clearly crazy about one another. Meanwhile Melania enters a local beauty pageant trying to impress the celeb Jimmy Valentine so she can get to Hollywood. This angers local mean girls Suette and Nadine who try to thwart her attempts. She does not win the contest but decides to impress his agent instead. Will she be able to do this? Meanwhile Carson and Buzz have a growing a mutual attraction which forms into a romance. However things get really awkward when Harley turns up and becomes close to Luanne. What will Carson and Luanne do? Will Chip and Pudge get back together for the dance contest and realise their mutual feelings?

The film is cute and is clearly influenced by Dirty Dancing although the characters are much less fleshed out in this film and the dancing is much less sexy or well- choreographed. Even though the 4 women are stereotyped I liked them. In particular Carson and Pudge as I felt I could identify with them most and they had real and sympathetic issues you could sympathise with. I also really liked Luanne who was very funny with her prim proper act and nerdy peculiar glasses. Also with her fussy bun which make her look years older than she actually is. It is interesting to see how she realised her old fashioned southern values are outdated and that it is ok to not to behave like a lady. Melania was also quite entertaining but I hated the beauty contest as it was so cringey and embarrassing although Melania’s speech was quite well performed. The men were however less well rounded with Buzz being a sort of bad boy but being rather flat in personality. Chip was also rather flat but I quite liked his romance with Pudge and I wanted things to work out for them.

The plot was quite good as I liked the theme of them wanting to dance and flirt with men in their last summer before college. It was clearly quite nostalgic in looking back to 60s and lost youth. There was however a serious side with the values of free love and sexual liberation being included in the story.

The other bit I liked was the clash of old fashioned traditional southern values with more liberal modern northern values. This is with the premise being the girls are going to supposedly visit Fort Sumter well this is the lie they tell their parents. Also there is the recurring theme of behaving like a southern lady and gentlemen with the younger ones trying to throw this off. However still being pulled back by their southern roots to behave in this way. This comes across well with Carson being reluctant to have sex before marriage and Luanne thinking having wild parties and wearing bikinis is outrageous. However both women realise having sex, flirting with boys and having a good time are fun and are good things to do.

The music in this film was great actually for me the best part of the movie. The script was quite well written although a little silly at times but it captured the mood of the period well. Also the lines were quite funny at times and also captured the southern image quite well too. I particularly like the ones where Pudge joked about her mother although her quotes were not that memorable. The accents were also quite well done and not too cringey.

Overall I would give this film 3.5 stars as it was cute and captured the mood of the period well. It was a little contrived and full of stereotypes but is entreating to watch.